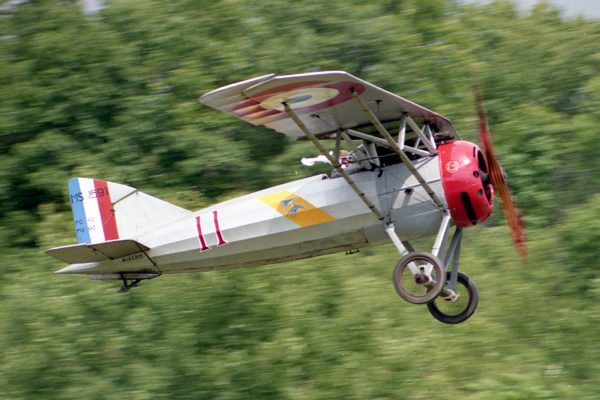 In early 1917, Robert and Leon Morane, and Raymond Saulnier presented their newest fighter, the Morane Saulnier A.I, to the French military. It was accepted and produced in large numbers. Even though the flight characteristics were well liked by many pilots, the duration of its combat service was limited to a mere three months because of alleged structural failures and reliability problems with the 160 HP Gnome engine. Many remaining aircraft were refitted with smaller, more reliable power plants and used as advanced trainers for the duration of the war, and beyond.

Famed aviator Charles Nungesser demonstrated his aerobatic skills with his own personal M.S. A.I, after the war. In 1919, Lt. Temple Joyce became the world’s champion “looper,” completing 300 consecutive loops with his A.I. One year later the record was raised to 1,111 consecutive loops performed by Alfred Fronval in his A.I. Flying of this type seems to contradict the question of the aircraft’s lack of structural integrity.

The museum’s original aircraft was purchased along with another A.I by Cole Palen at an auction in 1981 and restored in 1985. It flew at the Old Rhinebeck Aerodrome for several years. The fuselage from the second A.I project was converted to a Morane Saulnier N during restoration and is on display.