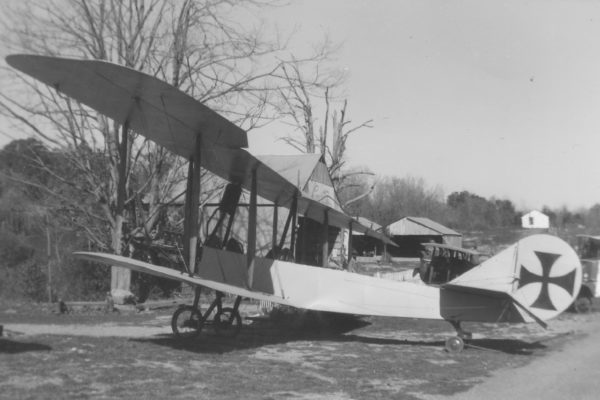 The Aeromarine 39 was designed as a military trainer for the U.S. Navy.  The first batch of 50 was provided with Hall Scott engines, which developed a bad reputation for catching fire.  The remaining 150 (the “B” model) were equipped with the Curtiss OXX-6 engine, and the upper wingspan was increased.  They were designed so the landing gear could easily be replaced with floats.

In 1921, the Lenox Hacksaw Blade company in Lenox, MA sponsored a publicity flight from Maine with their company logo emblazoned on the wings, tail, and fuselage using a colorful Aeromarine as a flying billboard.

In October 1922, the Aeromarine, flown by Lieutenant Commander Godfrey de Courcelles Chevalier, became the first aircraft to land on a U.S. aircraft carrier, the USS Langley. The landing resulted in a broken propeller. Even so the achievement was considered a success.

Giles Robinson purchased a war surplus Aeromarine 39-B in 1930 to become the first licensed pilot and aircraft owner in the town of Rhinebeck.  He based his airplane at Cozine Field in Rhinebeck, now the site of the Chancellor Livingston Elementary school.

Our Aeromarine is an original aircraft from the Roosevelt Field collection acquired by Cole Palen in 1951. Cole described it to be in excellent condition. In 1966, it burned while on an open trailer in transit to a photo-shoot in Florida for a cigarette advertisement. The cause is thought to have been rewiring of the trailer lights prior to the trip, but the story of a cigarette thrown from a passing car, igniting the highly flammable cotton fabric and nitrate dope finish has also circulated.

All that remains of the Aeromarine are metal fittings, charred wood and rusted wire.  Cole once told Paul Garber (first head of the Smithsonian’s National Air and Space Museum), that he felt a moral obligation to get the Aeromarine back together. It was the last of its kind and was destroyed while under his care. He tried, but other projects prevented him from completing the task. We hope to one day restore this elegant aircraft using its remaining original parts where possible.