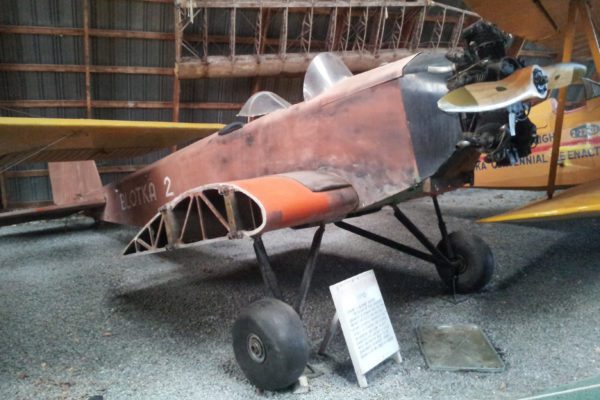 The Aeromarine company of Keyport, NJ, founded in 1914, created a series of moderately successful aircraft and engines. They were best known for their seaplane and flying boat designs along with a land-based trainer, the 39B, built during WWI. Hoping to capitalize on the interest in affordable aircraft ownership, the company renamed itself the Aeromarine-Klemm Corporation. From 1928 to 1930, they built mostly the Klemm L-26 monoplanes until the lack of demand during the Great Depression forced the company to close.

The Aerodrome’s Aeromarine Klemm has a manufacturing date of April 7, 1930 and was purchased by Cole Palen from Gordon Binns of East Paterson, NJ April 25, 1966. It flew only once at the Aerodrome before it was placed on display in the museum. Prior to that it had been through several owners, all of whom were based in New Jersey. One transfer of ownership occurred because of a years’ worth of unpaid hanger fees in June 1938. The Klemm was auctioned off to the highest bidder for $292.56. This aircraft appeared in an American Express credit card print advertisement in the 1970s. Half of the aircraft was painted to appear as a fictitious, old-time, backward-thinking air passenger service that would not accept credit cards.

Click for more information about the Aeromarine Klemm L-26-A