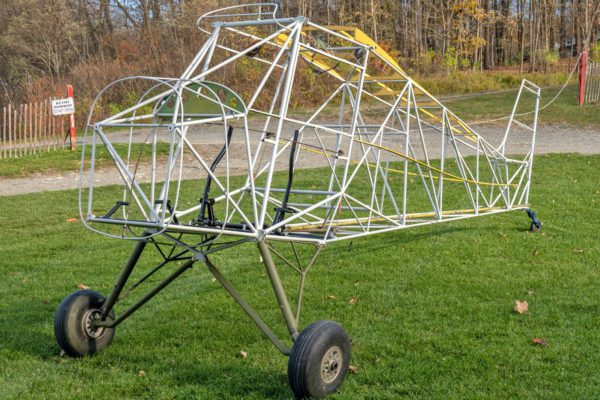 The Aeronca Aircraft corporation was formed in Cincinnati, Ohio in 1928. By 1929 they had introduced the C-2 monoplane, the first of many successful light aircraft. A devastating flood in 1937 forced the company to relocate to Middletown, Ohio where new production began in 1940. WWII saw the production of the L-3 primary trainers. The postwar era brought a return to popular civilian aircraft production with some 2,000 Chiefs and 8,000 Champs completed, until 1951 when operations ceased. In 1954, the design for the Champion was sold to Champion Aircraft which continued production of that model and their new Citabria. Production of the Citabria and Decathlon by American Champion Aircraft continues to this day.

Many Aeronca Defenders and their wartime equivalent, the L-3, are still flying in the US. Since 1941, they have been excellent primary trainers and remain a delight to fly. The Aerodrome’s Defender was donated in 2020 and is currently under restoration by the Old Rhinebeck Aerodrome’s Youth Program. Under the guidance of Aerodrome staff and volunteers, kids 10-16 years old, learn about flying and aircraft restoration including engine overhauls, woodwork, welding techniques, fabric installation, and aircraft maintenance.

Click for more information about the Aeronca 65-TAC Defender