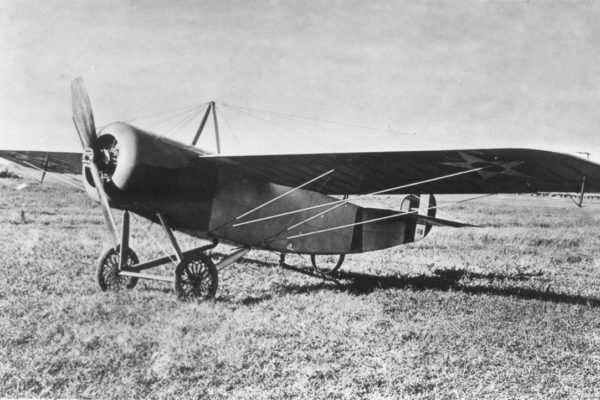 The first U.S. military contract for a fighter aircraft (via the U.S. Army Signal Corps) was awarded to the Pigeon Hollow Spar Company to produce the Albree Pigeon-Fraser Pursuit. Only three were built. The first was static tested to destruction, with carefully weighed sandbags placed on the structure to simulate and exceed the loads it would experience in flight. This allowed designers to test design stress limits with the aircraft safely on the ground. The second crashed and burned on its maiden flight, killing the test pilot. The crash was attributed to a flawed aircraft design, but more recent research revealed that the pilot was suicidal and may have intentionally crashed the plane. One scorched wing panel was repaired and installed on the unfinished third aircraft. The U.S. government canceled the contract, and it was stored in the rafters of the Pigeon Hollow Spar Company in Boston, MA. Designer George Norman Albree, stood by his design and felt he was the victim of a government conspiracy.

The aircraft was designed without movable elevators. The fuselage is hinged behind the cockpit and the entire tail section moves for pitch control. A rubber bellows (not present on our example) sealed the gap between the forward and rear portions of the fuselage.

Although not a success, the airplane did incorporate at least two innovative design features. It is believed to be the first aircraft to utilize a flat-bottomed airfoil, and its uniquely designed spring-type wheels were used to provide shock absorption, eliminating the need for bungee cord suspension in the landing gear.

In 1961, Cole Palen procured the aircraft from the Pigeon Hollow Spar Company. Cole replaced the fabric but never attempted flight with this machine. This is a prize example of an unsuccessful aircraft.

Click for more information about the Albree Pigeon Fraser Pursuit