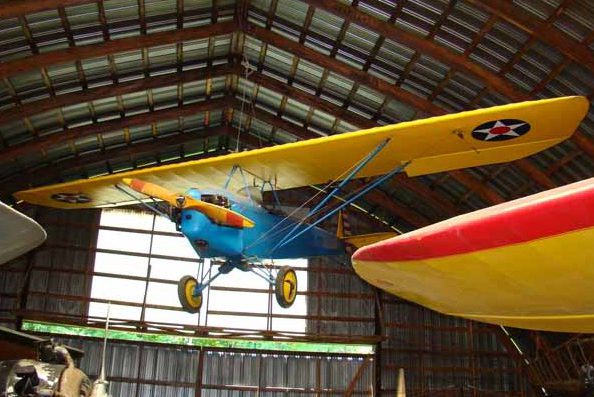 In 1927 Edward Heath had marketed his plans for a small homebuilt aircraft powered by a converted motorcycle engine. By 1932, the Heath won its Approved Type Certificate using the Continental A-40, flat four-cylinder engine. The aircraft could be built from plans, factory assembled parts or purchased as a completed craft from the factory. Three wing variations could be used. The Aerodrome’s example is the “clipped wing” version for sport flying and racing.

Cole Palen purchased this aircraft and intended to fly it home. After making very slow progress, he ended up buying a vehicle during his trip to drive it the rest of the way because it was taking him too long to fly home.

This Heath had a stroke of good luck when a destructive storm passed through and tore the roof off of the hangar it was parked in, leaving it unscathed.

Click for more information about the Heath Parasol LNA-40