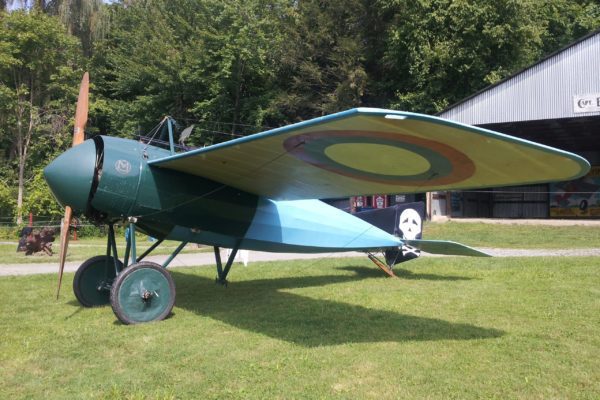 The Morane Saulnier N, “Bullet” was far ahead of its time. While contemporary designers were developing cumbersome pusher biplanes, the streamlined, tractor Morane Saulnier became the first aircraft to carry a forward firing machine gun. The back of the propeller was fitted with triangular steel blades that deflected the bullets. This method was crude, but effective.

Famed French aviator, Roland Garros shot down four German aircraft with this system (which he helped to design), before an engine failure brought him down behind enemy lines. He was captured and his aircraft was secured by German authorities before he had a chance to burn it. It was turned over to Anthony Fokker for evaluation. Within 24 hours, Fokker devised a far more practical method of synchronization for the gun to fire with the rotation of the propeller.

The Morane was regarded as highly maneuverable and tricky to land because of its high landing speed. Russian pilots, Ivan Smirnov and Alexander Kazakov trailed grappling hooks on ropes behind their machines to inflict damage on enemy aircraft.

Our Morane Saulnier N was constructed from an original Morane Saulnier A.I fuselage, obtained by Cole Palen in 1981, and new wings were fabricated to complete the reproduction. It is finished in the colors of Alexander Kazakov’s aircraft.