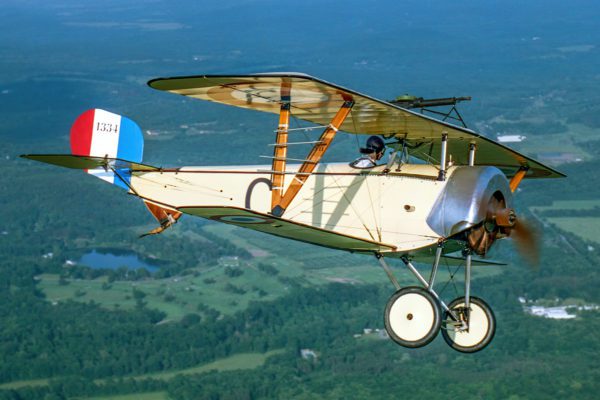 The Nieuport 11 was one of many successful fighters developed by the Nieuport company throughout the course of the war. It was known as a sesquiplane rather than a biplane because of the small area of the lower wings as compared to the area of the upper wing. Its agile performance inspired the Germans to develop their own sesquiplane fighter designs. Though agile, prolonged dives at speed produced a serious flutter in the lower, single-sparred wings that resulted in the occasional total loss of a wing with tragic results. This would plague “V-strutter” designs of all nationalities. The model 11 was eventually replaced in the summer of 1916 with the Nieuport 16 and better known 17, equipped with 110 HP rotary engines.

The Aerodrome’s example was built by Gordon and Kay Bainbridge of Rhinebeck, NY in the 1980s. It is equipped with an original 80 HP LeRhone rotary engine and instruments.  It is currently being restored (off-site) to fly once again. It will again be finished in the colors of the aircraft flown by Victor Chapman during the First World War. Chapman was a local Hudson Valley, NY hero who flew a Nieuport 11 with the Lafayette Escadrille. He was a fearless aviator and became the first American pilot to lose his life in aerial combat on June 23, 1916 in skies over Verdun.