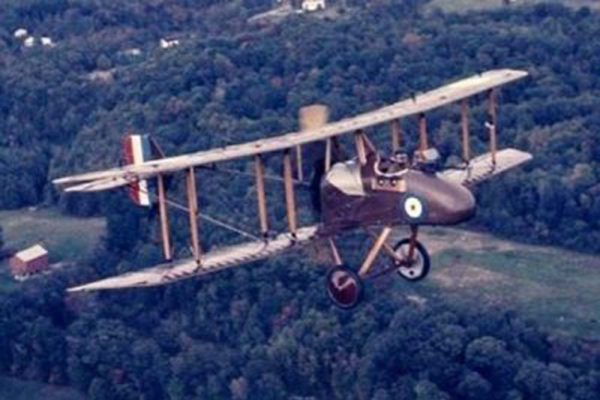 In 1915, the Royal Aircraft Factory introduced its “Fighter Experimental,” F.E.8. When the aircraft was designed, a suitable method of synchronizing machine gun fire through revolving propeller blades had not yet been developed by the allies. This “pusher” aircraft was equipped with its rotary engine mounted behind the pilot, providing him with an unobstructed field of fire for his forward firing machine gun. These “lattice-tail” fighters, much like the Airco DH.2, flew with an excessive amount of drag due to the forest of exposed bracing wires, booms, and struts.

Many examples of the F.E.8 are known to have crashed in accidents where pilots were unable to recover from spins. The factory test pilot was called upon to demonstrate the proper method of spin recovery before the machine earned some respect. By the time the F.E.8 appeared in combat in August 1916, the design was obsolete, having no chance for success over the new German Albatros D.I and D.II fighters. Incredibly, the F.E.8 remained active, though in limited numbers, until July 1917.

In 1973, Cole Palen constructed this reproduction in Florida, using R.A.F. drawings. It is equipped with an original 80 HP Le Rhone engine and it flew for many years. It was not Cole’s favorite aircraft to fly having said in an interview, “I can understand why they were most always shot down”.” In 1987 the nacelle and center section wing panels were loaned to the National Air and Space Museum in Washington, D.C. where they can be seen today on exhibit in the World War I gallery.

Click for more information about the Royal Aircraft Factory F.E.8