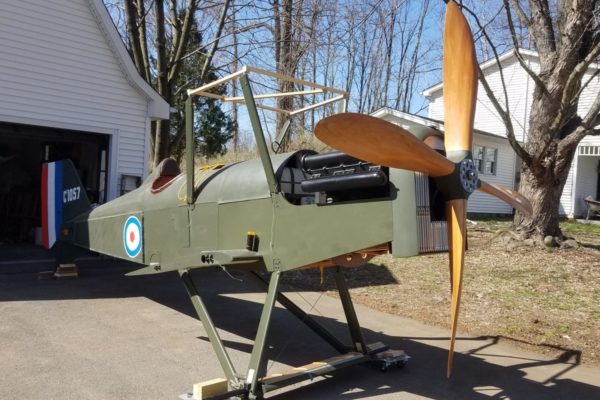 Designed by the Royal Aircraft Factory, the S.E.5a (Scout-Experimental) was rugged and fast. It appeared in March 1917 and would prove to be a formidable opponent for the duration of the war. Though slightly less maneuverable than the Sopwith Camel, it was more forgiving to less experienced pilots. It was armed with two machine guns: one synchronized Vickers firing through the propeller, and one upward-firing Lewis on a sliding mount attached to the center section above the pilot.

By 1918, the introduction of the 200HP Wolseley Viper engine resolved the Hispano-Suiza engine issues of earlier models. Production caught up with demand allowing the S.E.5a to equip many more British and even one American squadron. Over 5,200 had been built by the war’s end and had been flown by most of the leading British aces to great success. The S.E.5a, along with the Sopwith Camel helped to insure Allied air superiority from mid-1917 forward. This aircraft was started by Art Scarborough of N.H. and donated to the Aerodrome by his family in 2013. It is currently being restored by Aerodrome volunteers. It represents an early S.E.5a flown by 2nd Lt. A.P.C. Wigan of the RAF 24 Squadron. Wigan was shot down by Blue Max ace, Hptm. Adolf Ritter von Tutshek, C.O. of JG2 on March 6, 1918 becoming a prisoner of war. Nine days later, von Tutschek was killed in action by Wigan’s squadron mate, Lt. H.B. Redler.

Click for more information about the Royal Aircraft Factory S.E.5a