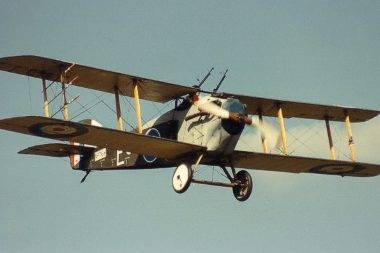 With its negative stagger and rakish stance, the Dolphin was first received into British squadrons with mixed enthusiasm. The pilot sat with a Hispano-Suiza engine and twin Vickers machine guns practically in his lap. Twin Lewis machine guns were mounted on the top wing (on early models), inches from his face. The top wing was mounted such that the pilot had a good range of visibility but exposed his head to unpleasant consequences should the aircraft roll over on landing. As a result, legend has it that the Dolphin was nicknamed the “Block Buster.” Visibility downward was restricted with the lower wings mounted directly below the cockpit.

The Dolphin arrived at the front in February 1918. In time, it would prove to be a fast and maneuverable fighter, particularly in high altitude combat. It was the first multi-gun fighter in history and could carry four 25 lb. Cooper bombs, ideal for its role in trench strafing. Many pilots opted to remove one or both Lewis guns finding them awkward and a potential danger in the event of a roll over. Many British pilots became aces while flying the Dolphin including one American, Capt. Francis Gillet, who earned 20 victories with No. 79 Squadron, RAF.

Andy Keefe and Cole Palen built this authentic reproduction in 1977 from Hawker-Siddeley drawings. It is equipped with an original 180 HP Hispano-Suiza engine. On September 30, 1990, the Dolphin made an unscheduled landing in the trees during a show due to an engine failure. Pilot Dick King was not injured. A long rebuild has been underway ever since.