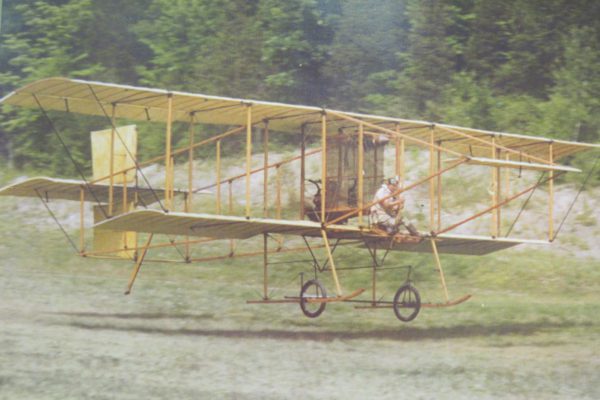 In 1970 Cole Palen acquired an original 60 HP ENV, Type F, Series 1, Serial #4 engine. It had been discovered in 1964 in a coach-house tavern in England, buried at the bottom of a pile of rubbish. The engine had found its way into the hands of A.E. Tagg, an aero enthusiast who restored it, researched it, and found it to be the same French-built, V8 ENV that Cecil Grace had removed from his ill-fated Short airplane.

Grace removed it so that his aircraft would be eligible for the £4,000 Baron de Forest prize. The rules stipulated that the entire aircraft had to be of English origin to be eligible. He replaced the new French ENV engine with an English-built 60HP Green engine and set off for the prize. The objective was to depart England, cross the Channel and fly the longest distance into the continent. On December 22, 1910, Grace reached Calais but was forced to land due to high winds. He decided to return to England and try again. He took off for England and was never seen again, presumably lost in the Channel.

This engine inspired Cole Palen to build a Short S-29 reproduction. In 1971, after considerable research, he started building the Short from drawings, sketches and photographs from British magazines of the period such as FLIGHT and AERO. The airplane flew a few seasons in the early 70s at the Aerodrome. Limited to calm weather, it flew from one end of the runway to the other.