The Piper Vagabond was the first in a series of successful short-winged Pipers. They were economically built for the post-war civilian market using much of the factory tooling created for the J-3 Cubs. The Vagabond became a popular and inexpensive two-place airplane, well-suited for training and sport flying. Designed to carry the night airmail, the Pitcairn had excellent maneuverability, range, speed (130 mph) and was considered a very modern equivalent of the Pony Express in 1929. In later years Pitcairns became popular as crop-dusters because of their excellent load-carrying ability. Our Pitcairn was originally restored in Vancouver, WA, from a former crop-duster. It […] 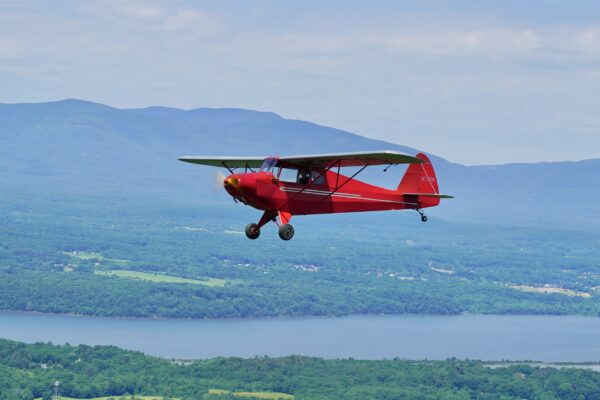 Edward Porterfield started his company in a former woodworking factory in 1934. In 1936 he introduced the “Collegiate” to compete with similar light aircraft from Piper, Aeronca, and Taylorcraft. About 475 were built until production ended during WWII. This airplane was donated to the Aerodrome for use in our educational program. Louis Renault developed his first automobile by extensively modifying an 1898 Dion Tricycle. At one of his first private demonstrations he secured 12 orders and the Societé Renault Freres was formed. In the years that followed Renault automobiles won numerous races throughout Europe and Louis Renault built his own empire producing aircraft, aircraft engines and […] From 1904 through the present day the Rolls Royce name has become internationally known as the very finest in automotive engineering and luxury. Founded by Charles Rolls and Henry Royce, Rolls had the sales skills and Royce possessed the production and design knowledge to create a great team. They set new standards for excellence and […] The 1915 F.E.8 “pusher” was designed before the advent of a British synchronized, forward-firing machine gun. The pilot, seated in front of the engine, had a clear field of fire with a single Lewis machine gun aligned directly in front of him. By the time it appeared in combat in 1916, it was already outclassed by the faster and more agile Albatros fighters just arriving. The arrival of the S.E.5 fighter in early 1917 helped to turn the tide of the air war in favor of the Allies. Its stability and strength combined with maneuverability and fire power helped to turn adequate pilots into deadly, aerial aces. Hundreds of British, and even a few Americans, would become aces while at the controls of the fast, and responsive S.E.5 and later S.E.5a models. The Royal Enfield Company stayed in business for over seventy years manufacturing motorcycles from 1898 through 1971. Using some of the best riders around, Royal Enfield competed successfully at numerous motorcycle races and held the land speed record for sidecar outfitted motorcycles driven over one mile. On May 21, 1927 Charles Lindbergh made history by becoming the first to fly an aircraft non-stop across the Atlantic Ocean in his Spirit of St. Louis. Lindbergh made the trip in 33 hours and 30 minutes and altered the way the world perceived aviation. He became an instant international hero and to this day is considered one of the most significant figures in aviation history. During its peak the Saxon name was a household word. A brand new Saxon roadster sold for $395, and its operating cost was advertised as ½ cent per mile. Electric lights and a starter were available as options costing an additional $70. It featured a “high speed motor” that was light, powerful, efficient and durable. […]